myGengo: Towards a bi-level market? 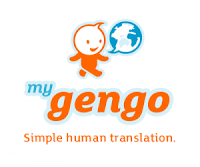 Followers of this blog will be aware that crowdsourcing is making an impact in the translation world (for the previous posts about it, enter crowdsourcing in the Search box on the right). It also gets a mention in the current Wikipedia article on Translation. In case it's not already clear to you, the term, which is a portmanteau word put together from crowd and outsourcing, means:

"taking tasks traditionally performed by an employee or contractor, and outsourcing them to a group of people or community, through an 'open call' to a large group of people (the crowd) asking for contributions."

Until recently, translation crowdsourcing was organised on a voluntary, unpaid basis: NGOs appealing for help, for example. Now here comes myGengo, which aims to turn it commercial for the profit of translators and the benefit of consumers. "Join the revolution!" it proclaims. So let’s take a closer look before we‘re swept away.

1. All bilinguals are invited to join in, irrespective of prior qualifications. “If you're bilingual and you're online, you could qualify as a myGengo translator. It's free, simple and quick to take our tests.” Well yes, there’s a test. “Your test will be reviewed within 30 days by a Senior Translator who is native in the language.” 30 days? That’s something they need to improve. But myGengo isn’t without standards.

2. Here’s the most interesting part. Successful applicants are divided into two categories:

(A) “Our Pro level for professional [and presumably Expert] translators” – a traditional category.

(B) “Our Standard level for bilinguals” – a non-traditional category. “It's perfect work for you, if you are bilingual, with a good written style in your native language and fluency in your second language.”

3. The workload is also divided according to the two categories:

(A) Pro level: “These jobs are more complex and important; usually translations for public use where accuracy is key.”

(B) Standard level: “These jobs are translations of simple or non-critical texts, like blog posts, articles to read, simple menus and internal business documents.” Clearly this level is intended for Native Translators.

4. There’s another interesting wrinkle to the Standard level: “It's also great if you are training to be a translator.” This is a clear and open invitation to the hundreds of translation school students who would like nothing better than to find a work placement that pays while they study. Bear in mind that there are about 500 undergraduate and postgraduate translation programmes around the globe.

5. The rates of pay are likewise differentiated: Pro level US$ 0.08 per word, Standard level US$ 0.03 per word. myGengo loads a couple of cents per word on top of that in its prices to consumers, which is reasonable for what is, in effect, a commercial translation agency. The Pro rate of pay will attract professionals in some countries and under some circumstances; the Standard rate is in uncharted territory.

A bi-level translation market – bi-level in respect of qualifications and of remuneration – isn't entirely novel. There's long been such a market in conference interpreting (CI). However, the lower level of the CI market was talked about disparagingly and in hushed voices as the so-called grey market – I'll write more about it in another post. This is the first time I've encountered an openly promoted and advertised bi-level market. It'll be very interesting to watch whether myGengo succeeds.

Translation. Wikipedia. http://en.wikipedia.org/wiki/Translation.
Posted by translatology at 8:22 AM