Another Native Interpreter Helps Out in a Disaster Area 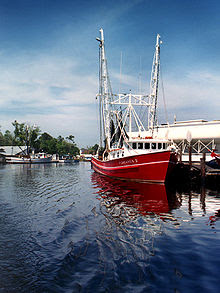 When I saw that interpreters were needed in the bayous (Alabama and Louisiana coastal wetlands), my first thought was, “Ah, for the Cajuns.” The bayous are home to the Cajuns (pronounced KAY-j'ns), a long-established French-speaking community expelled from Canada by the British in the 18th century. They’re bilingual in French and English, but they might need help with complicated documents.

Turns out, though, that the need isn’t for French, it’s for Vietnamese and Khmer. Hundreds of Vietnamese and Cambodian refugees have settled in and around Bayou La Batre (see photo), where the climate suits them and they work in the fishing industry. They form a third of the local population.

They were happy until the BP Deepwater Horizon disaster ruined their livelihood, at least temporarily.

Then came the need to file for compensation.

Hundreds of non-English-speaking seafood industry workers endured an arduous claims process… because of what one volunteer group identified as a lack of translators.
When BP was running the claims process, many in the Bayou who speak Vietnamese or Khmer exclusively had trouble with the language barrier, according to the Boat People SOS organization, a nonprofit assisting those in local Southeast Asian communities collect claims.

And probably many of those who do speak some English would not know enough to navigate the procedure.

The trouble began as soon as BP launched the claims process, according to Grace M. Sciré, the group’s regional director.

The toll-free phone number to file a claim was only offered in English.

“They started to come in and say that we can’t file for a claim number because it’s in English, and we don’t understand what they’re asking us,” Sciré said. “We started making the calls for them.”

BP spokesman Ray Melick said that, through a contractor, the company hired a Vietnamese interpreter to work at the claims center in Bayou La Batre. BP also had translators who spoke Spanish, Khmer, Laotian and French, Melick said.

But at least one of the translators, Sciré said, only knew a few Vietnamese words. BP said their translators were hired through the U.S. Department of Homeland Security.

“He could not carry a conversation,” said Vinh Tran, who is volunteering as a translator for Boat People SOS. “Listening might be another issue, but the responding part was not there.”

Tran helped provide translation for an oil spill-related panel discussion at Alma Bryant High School on Thursday and for a meeting... at the Bayou La Batre Community Center on Saturday.

Notice that Vin Tranh volunteered to act as an interpreter. Back to Native Interpreters. Native not Natural, because the competence of Natural Interpreters limits them to “everyday circumstances”, which these complicated affairs were not. Perhaps the interpreter criticised by Sciré was a Natural.

Johnny Nguyen, vice president of operations of SPS Inc., an accounting firm in Mobile helping with claims in Bayou La Batre, said the process was a struggle for those who speak English as well.

P.S. This post was delayed by atmospheric conditions in Valencia. On Friday, the temperature reached 44º, the highest ever recorded in the city. My netbook was overheating.
Posted by translatology at 2:23 AM