The Earliest Depiction of an Interpreter 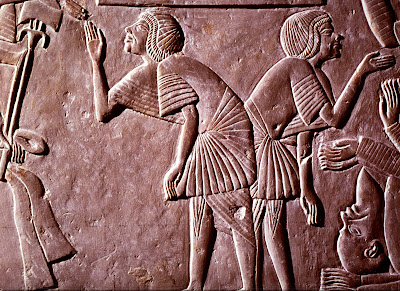 This beautiful photo of a fine Egyptian bas-relief has been lying for several years in my files and I think it’s a pity to leave it there unseen. It shows a detail, just a small corner, of a very large frieze from the tomb of Haremhab (or Horemhab) at Saqqara, ancient Memphis, just outside Cairo. It dates from about 1330 BCE. Today the frieze is in the National Antiquities Museum at Leiden, Holland

Horemhab was an exceptionally clever man who rose from the rank of commoner to become general of the Egyptian army, and eventually pharaoh. At the period depicted, he was already regent to the boy pharaoh Tutankhamen and was in charge of foreign affairs. He is shown conveying the pharaoh's reply to a delegation of Syrian and Libyan vassals come to petition for protection from incursions by mountain people and Bedouin. He does so through one of the interpreters who were kept at court in Memphis for receiving delegations from outlying territories, and here we see the interpreter cleverly ‘animated’ by the device of a double figure facing both ways, as though turning alternately towards speaker and listener. It’s the earliest known graphic depiction of an interpreter at work, or indeed of any kind of translator (though not the earliest mention).

The Egyptians were cultural snobs. They considered other peoples and languages 'barbarian', even as demonic or sick; so that interpreters sometimes held title of Interpreter and Doctor. However, there were bilinguals among them, especially from among the peoples along Egypt’s frontiers. For example, Joseph, in the Bible, a Jew who became governor of Egypt and who therefore knew Egyptian and Hebrew (Genesis 42:23); and the Nubians who provided interpreters in the Sudan borderlands. (Even today, at Aswan, one meets Nubian-Arabic bilinguals.)

The tomb at Saqqara was plundered in the 19th century and pieces of it have ended up in various museums, one of them the museum at Leiden. I visited the museum in the 1980s to pay homage to the interpreter and to marvel at his survival after three millennia, having learnt about him from an article by Ingrid Kurz. I urge you to do likewise if you’re in Holland. But there were no illustrations of the frieze on sale; and even today it’s not shown on the museum website, though the last time I checked with them, which was in 2004, it was still on display. I don’t think they appreciate its significance. Anyway I wrote to them and they kindly sent me this photo, but in a much larger format than I can reproduce.

Photo: Rijksmuseum van Oudheden
Posted by translatology at 3:32 AM