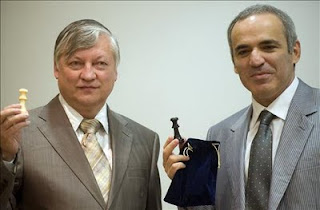 Three weeks ago there was a memorable exhibition chess match here in Valencia between supreme Grand Masters Karpov and Kasparov. Why Valencia? To commemorate that this is probably the place where the powerful Queen piece was introduced into the modern game in the 15th century, some think in homage to Queen Isabella of Castile.

The working language of the event being English, a friend of mine was called in at 30 minutes notice (!!) to interpret the commentary, interviews, etc., for Spanish television. His was a Professional Expert job, and as such it doesn’t concern us here. However, he told me some anecdotes that do.

The first is about Karpov. The international chess press were there in force to cover the match, and a Russian journalist asked Karpov a question in Russian. Karpov gave him a long reply, also in Russian naturally. Then the other journalists turned towards my friend for a translation. He had to explain to them that he didn’t know Russian. “Never mind,” said Karpov, “I’ll interpret myself.” And he proceeded to do so into English, at which everybody present was happy.

That was autotranslation, aka self-translation: translating what one has said or written oneself. It’s fairly frequent in literary translation; Nabokov did it, for example. But it’s especially common in Natural Translation; in fact, we posited in ‘Translation as an Innate Skill’ (see August 15 posting) that in bilingual infants it precedes transduction (translating between other people). On the face of it, autotranslators enjoy certain advantages. For one thing, they know in advance the meaning of what they’re saying in the first language; they don’t have to make any effort to hear or read, nor – above all – to understand; for them there are no ambiguities. We can therefore hypothesize that the translating process is simpler, faster and imposes less mental strain. For another thing, they’re the proprietors, the ‘copyright holders’ as it were, of their own texts and utterances (though there may be some exceptional circumstances, in court proceedings for instance, where they can’t make changes). Therefore, if they decide to add or omit something, who is to gainsay them? Not that Karpov left anything out, it seems, because his interpretation took as long as his original answer; and when my friend was interpreting him into Spanish, he was insistent that everything be said as he had said it.

How and to what extent autotranslators actually exploit their rights is a matter for investigation. Autotranslation doesn’t fit into the traditional model of the translation process as

which is awkward for theorists.

The interpreter was Guillermo Marco of Intérpretes de Conferencias, http://www.interpretesdeconferencias.es/

Vladimir Nabokov, Mashen'ka, his first novel, translated by the author and Michael Glenny and published as Mary, 1970.

Photo: http://www.matchkarpovkasparov.com
Posted by translatology at 3:25 AM