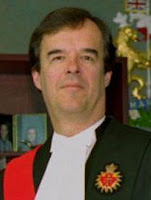 From time to time somebody asks me when I think non-Professional translators (by which they mean non-Expert in my terminology) should not be used. (I was asked it on the Translation Advisor blog last year.) I usually start by answering: When the translation may have legal implications or consequences. It's not just a question of quality. A translation by an Advanced Native Translator may be just as good per se. It's also a matter of authority. If the translation is ever used as evidence or called into question in legal proceedings, then it won't be necessary to go through some procedure to establish the translator's ability if that has already been tested and sanctioned by some recognised body. One obvious area where the translating should carry such authority is court interpreting. But notice I say "should carry" . The observable reality is that the precept can't always be followed. There are many reasons, but one of the most common is that adequately qualified interpreters aren't available at the right place at the right time, and this is often due to the languages involved. Another reason which arises these days is that the interpreters have been trained in the traditional mode for court interpreting, which is consecutive interpreting, but the powers-that-be have decided to import modern technology and switch to simultaneous interpreting.

Several previous posts on this blog have commented on the linguistic aspect and problems of the Shafia murder prosecution in Canada. (To find them, enter shafia in the Search box on the right.) That trial is reaching it climax at present and is widely reported in the Canadian media (see References). Whatever the outcome, it's likely to go down in the annals of famous Canadian murder mysteries. However, there's been nothing new linguistically. On the other hand, other Canadian reports tell of one of the most frustrating and expensive things that can occur when the interpreting goes wrong: a mistrial.

"Words matter, and how.

But a Hindi interpreter mistranslated those phrases exactly that way in a sexual assault case in Brampton, Ontario, triggering a mistrial and sending ripples through the Greater Toronto Area legal community.

Superior Court Justice Casey Hill [see photo] declared a mistrial in a case against Vishnu Dutt Sharma, an Indian citizen on a work permit in Canada, because the interpreter’s Hindi interpretation of the proceedings was poor and substandard, according to court documents.

'In this case, the non-English-speaker was prejudiced by a denial of full linguistic presence at his trial on April 27, 2011, on account of pervasive departure from the guaranteed standard of interpretation to which he was constitutionally entitled, and in particular during the very details of the complainant’s factual allegations of sexual assault,' Hill said.

...audiotapes from cross-examination were sent to an expert in the United States, who, in a scathing report, said the interpreter 'did not interpret verbatim, summarized most of the proceedings and was not able to interpret everything that was said on the record.'

Umesh Passi, a member of the New York State Bar, said the interpreter spoke 'perfect Hindi but could not keep up with the speed required for simultaneous interpretation.'

Prashant Rai, Dutt’s lawyer, is fluent in Hindi and says that helped bring the problem to the forefront. The court may not have become aware of the inaccuracies otherwise, he added. 'She spoke well in Hindi… I don’t know what happened while interpreting,” Rai said."

Perhaps, at least in the examples quoted above, the non-Expert interpreter was inhibited by cultural taboos from using the literal translations.

For what it's worth, the interpreter in question was accredited and paid as a professional by the Ontario Ministry of Justice. Why? Probably because, in the words of Pat Band, a director with the Criminal Lawyers’ Association of Toronto, "The situation with interpreters is a crisis. There aren’t enough accredited interpreters and the standards (of interpreting) are almost impossible to tell.” In short, whether we approve of it or not, a great deal of court interpreting is still done by non-Experts. One of my correspondents even wonders whether "we have ended up the wrong way round in that demand for, nay a feeling of entitlement to, quality interpreting has outstripped our ability to provide the necessary training and support strategies to achieve it."